A longing for something that constantly eludes the searcher.


A passage from Leaving Alexandria by Richard Holloway that got me thinking and nodding in recognition of that feeling. I just thought I'd share it with you.

' How can you make yourself one with a landscape? You can tramp over it, become so familiar with its contours that you never need a map, but you can never possess it. It is always eluding your desire, just out of reach, beyond your possessing. I did not know the word at the time, or the idea behind it, but on the hills I was experiencing latency, the sense of something hidden behind what is seen. How can you find words for what is beyond sound, make visible what vanishes when seen? .... I was looking for something beyond myself, something out there that would take me out of in here - the life that was going on in my head. I was looking for transcendence, the beyond that is sometimes encountered in the midst of things, usually when we are not looking for it. This is the stab of awareness that causes us to turn on our heels to catch the shadow that is behind us. It is the sense of a presence, beyond knowing, that we reach out towards. And it can be experienced as loneliness. We are missing something, either because it is not there or because we have not yet found it. '  (p.41)
Posted by James Dyas Davidson at 14:26 No comments:

Reading can help you find that elusive 'me'.

Every now and then, I read a book which helps me understand myself better. Some authors can eloquently put into words feelings and experiences I struggle to.

This summer I read Richard Holloway’s autobiography Leaving Alexandria. I had listened to him on Radio Scotland and he sounded like he had an interesting story to tell.

I really enjoyed his biography but it was his meditations on some of his past experiences that resonated with me. I found myself pausing my reading and thinking, ‘ that’s me he’s describing’ or ‘that’s exactly how I feel’.

Anyway, I wanted to collect some of these passages from the book in some blog posts, I suppose as a way of giving them further thought and to share with anyone who might read this.

The toughest lesson life teaches is the difference between who you wanted to be and who you actually are. And it can take a whole life to teach it. (p.10)

Later on in the book he returns to this realisation of how time can steal everything from us and leave us feeling disappointed in how we turn out:

Any normal human heart feels the knife edge of regret at moments of retrospection and self-examination. But there is another kind of regret that is more difficult to explain. It is sorrow not over what we have done but over what we are. It may even be sorrow over what we are not. And I don’t mean handsome or rich or charming. One of the lessons a long life teaches is how formed we were by characteristics that were entirely beyond our control. Being who we were, we were bound to act the way we did. To have acted differently we would have had to be a different person. Maybe a better person, because, tragic as it may appear, even unfair, there are good people, not so good people, and bad people. And the big discovery we make in life is the person we have been revealed to be. We don’t have that knowledge when we start out. We imagine there’s a list of characteristics we can acquire if we fancy them, whereas the main lines of our own personality were cast before we knew it. This does not mean that we have no control over our decisions and choices. It does mean that we will have little control over them till we acknowledge who we are and accept the reality of the hand we have been dealt to play. (pp.226-227)

A while back, BBC Four had one of their 'photography nights' which they do occasionally. I recorded them on DVD to watch later. Among the many programmes was one on a photographer I'd never heard of, James Ravilious.

When I saw his images I was impressed, very impressed. They seemed to be carefully crafted, perfectly composed and had a surreal quality to them. 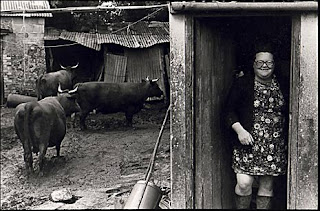 James was the son of the famous painter Eric Ravilious and you can sense the influence painting and in particular, British painting had on James's work.

I find the images of rural life in Devon he did for the Beaford College stunning. The quality of the black and white images is superb, with detail in the shadows and highlights, even when he was shooting into the sun. His compositional skill is what I admire the most. James was a great admirer of Cartier-Bresson and many of James's pictures have that 'decisive moment' feel but also touches of surrealism. 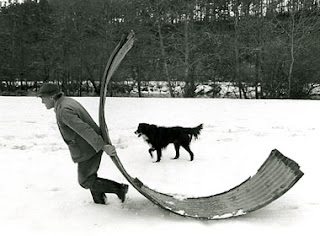 James managed to achieve many candid shots because he had a strong relationship with the community he was photographing. He was accepted and his subjects were relaxed in his presence.

His images of rural life in north Devon is much more than just a record of a way of life in steady decline. They are poignant and beautiful. He captured all aspects of rural life in that area and created a tapestry of scenes of a way life which was disappearing. There was no real narrative I suppose, with a beginning and an end, it just was what it was, before it changed forever. 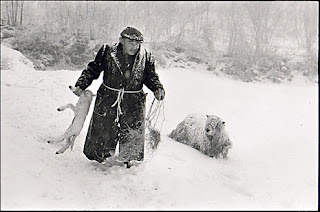 My own images of abandoned communities lack the sort of people that populate James's images and my images have less of an impact because of this absence of characters. It is for this reason that I pour over his images with a mixture of admiration, inspiration and pleasure but also with some sadness that 'my' characters, 'my' subjects have gone and left only silence. 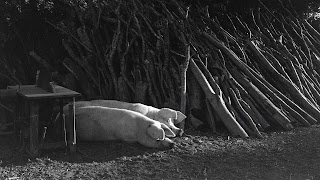 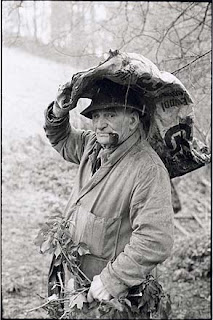